In 2009 when I woke up in the hospital just after femur surgery I could clearly hear a voice talking to me. The voice was being heard just as loud as somebody on earth was talking, but this voice was from a person that I could not see. I also saw visions of things from the spirit world side. This heavily intrigued my curiosity to the point it obsessed me for years. I wanted more of this and wanted to speak to God directly, but how do I do that? I was being directed to learning from the spiritual texts. The ABC guide I developed after I took a deeper look into the Bible. I found doorways in the Bible that I had never noticed before. I gave my all to God and eventually I received a conversation. I do not know what was said to me but I found myself burning for four days. It is interesting that just recently November 2020 I received a call from a spiritual healer named Virginia who said she saw a vision of me and needed to talk to me. We have never spoken to each other before. Virginia mentioned to me that God indeed spoke to me through a process known as Baptism by Fire. Honestly I do not think that I personally was able to create this conversation to happen, it was just my time that this conversation was scheduled to come to me. This meeting with the creator completely changed my life and the overall way I see what this earth life really is. 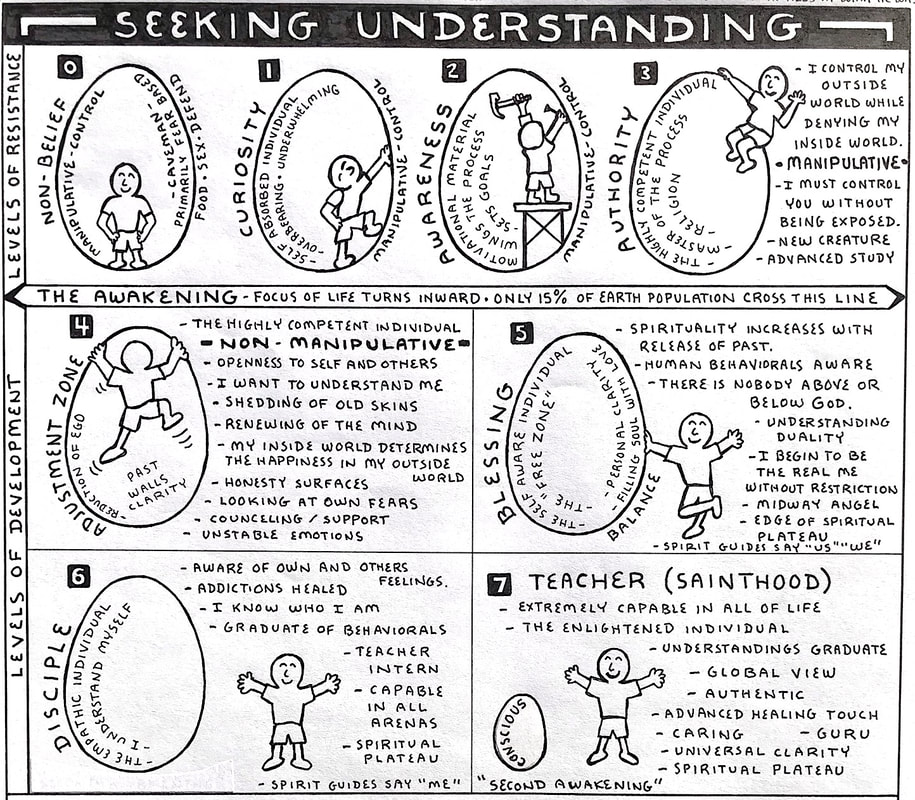 Looking at the Marty egg illustration “Seeking Understanding,” the egg is the body prison that the mind/soul is trapped within as it resists anything but concrete evidence which establishes truth. The person in the illustration represents the inner child as it partners with the mind/soul to escape this prison through belief in faith. The further escape from the egg prison, the more the soul experiences a higher level of conscious love.
Manifest anything!!! The Intention is fulfilled. Marty has learned to simply show his two open hands to any need, and the need in most cases becomes fulfilled by others as Marty Genuinely speaks to the others in a spirit to spirit connective manner.
I am not sure exactly where I found this exquisite story, but I placed it around the outer edge of page two of the ABC Guide. I love this story! "Along with the crew was a priest who was seeking a new adventure. The boat came upon a island that was never noticed before so the captain stopped to check it out. Everybody went their own ways to explore, so the priest decide to follow the shore line and came upon three men. The men were chanting the words, “Bless thee men of three, Bless thee men of three, Bless thee men of three.” The priest introduced himself and found the men to be very peaceful and kind. Then the priest asked if the men knew the Lord’s prayer, and they did not. The men deeply desired to know it so the priest remained on the island. After a week the men knew the prayer perfectly and were very thankful for the priests good work. The priest said good bye and the boat sailed away. A year later the priest was on a different boat which was passing closely by the same island. The priest started thinking about the men, and then was suddenly seeing them walking on the water toward the boat. The priest was totally amazed at what he was seeing. The men approached the priest and said to him that they were sorry, so sorry for forgetting the Lord’s prayer, and begged the priest to teach it to them once again. The priest replied back saying, “All you need to know is: Bless thee men of three, Bless thee men of three, Bless thee men of three.”