He got a laugh out of my story and found it amusing. I asked if he still had any of the clothing especially the pants that he was wearing. He said, "Why would you want those pants, they have a hole in them near the knee?" That was exactly why I wanted the pants. You see, in collecting clothing memorabilia, an item is always more valuable if it has a rip or tear in it, especially if you can see the tear in a photo or video. This way there is no doubt that it is the original over just another store bought fake.
jumping up and down like some school girl. Jim came over and broke the ice saying to Rich, "It is very nice to meet you." I noticed this blue paisley shirt hanging on a hanger on the wall, but I walked right by it and stood wondering why Jim has not given me his shirt yet. Jim looked at me and said "That is the shirt!" Ummmmm, I was expecting the red one that he was wearing in the Nose photo and I became disappointed of what I was purchasing.
I got in contact with Jim again and asked if he could recreate more of the wood buttons for the shirt. He said that he would first need some manzanita wood to carve the buttons out of. I told him the Manzanita was on the way. At that time Rich and I were working on creating new climbing routes at our secret area named Northern Devils Canyon, which is near Superior Arizona. Northern Devils Canyon is filled with manzanita bushes and I was psyched on the button project. Jim received the Manzanita branches and carved 6 new wood buttons out of the branches, and sent them back to me. From there I personally sewed 4 of the 6 buttons onto the shirt in the places where the missing buttons originally existed. The only original button is the second one down from the top, black thread. It can easily be seen in the 1975 "Nose in a Day" photo just below Jim Bridwell's hand which is leaning on John Longs shoulder. 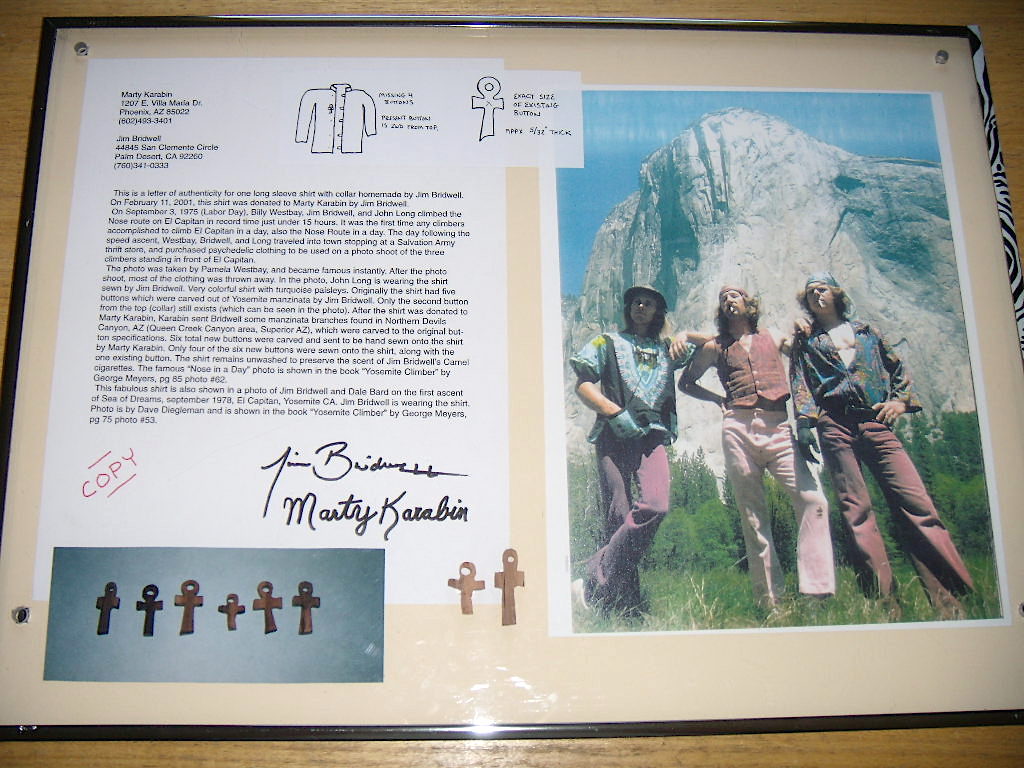 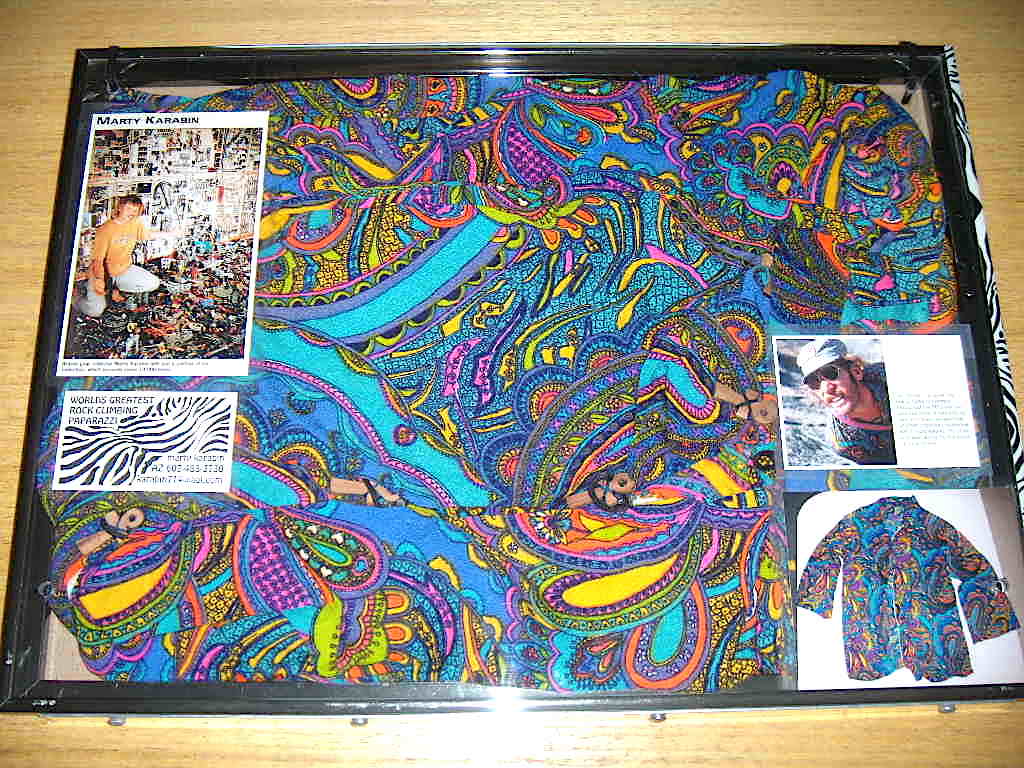 In the picture frame above you can see 4 of the 5 shirt wood buttons. On purpose I used blue string to resew the new buttons onto the shirt while the original button, which is the button touching the photo on the right, was sewn on by Jim Bridwell with black string.
In July 2011 I created a display of two glass frames which showed the history of the Jim Bridwell shirt, to be placed on the Omega Pacific company booth at the 2011 summer Outdoor Retailers Show in Salt Lake City. The show was four days long so every night I had to take down the shirt display since Omega Pacific didn't trust it becoming stolen overnight. Everybody that came across the shirt was excited to be with this piece of amazing history! So as a treat, just before the show was over I took the shirt out of the glass frame and allowed people to put it on as photos were taken of the moment. After the show I brought the shirt to the Phoenix Rock Gym and allowed a few people to put it on as more photos were taken, then I packaged it up and sent it to the Yosemite Museum attention Ken Yager!

I call this segment: "Last call for the Bridwell Shirt!!!" 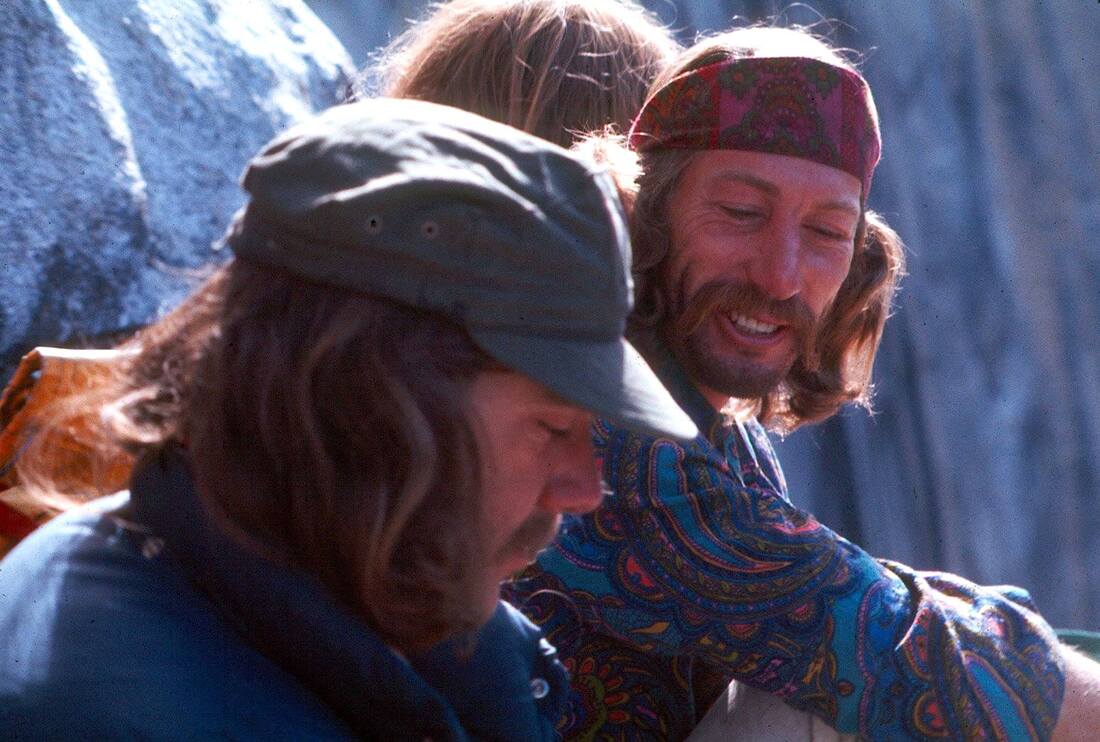