Drunk on memory of it's perfection

In 2001 my heart stopped and suddenly I was in a different place. In 2010 I suddenly couldn’t breathe and images formed which looked like people reaching out to me welcoming me home, but I chose to remain in my earth self. Once truth was presented and I witnessed that when I died, I didn’t actually die but was still me while being outside of my body, this earth life started to feel very lonely. I started searching for God. I needed to find God. I then really really needed to find God. I knew I was invited to be with God, but I could not figure out how to reach God. I then gave my all to my God mission and was in desperation to find God. Many nights I was on the floor rolled into a ball and crying deep groaning tears needing to be with God. Then something happened.

Over a four night period, I awoke completely drenched in sweat. I knew as I slept I was with a divine presence that was close to me. My bed was drenched but not just the sheets and pillow, but it was as if somebody took a hose and poured many gallons of water on my bed. My body felt fine and I wasn’t experiencing dehydration or anything. I visited a doctor who said I was in complete health and it must be some form of severe night sweats that I was experiencing. He too was surprised of how much water must of came out of me to cause this amount of drenching to happen. This went on for four days and then once again, all became normal. I felt completely cleansed like I had a new body after the four day phenomena.

I know in the Bible a person becomes a new creature once the person gives themselves to Jesus and or the Father. I figured I became this new creature years before since I positioned myself to being a vessel for the divine to direct. But this was something that was not mentioned. As a kid I was baptized a few days after birth. I though becoming the new creature was a personal choice where I was baptized again in my age 40s. Maybe becoming the new creature was not to be performed through my own efforts, but through the divines invitation. Many years later I found out that this night sweat phenomena is called “Baptism by fire.” In some amazing way I was spoken to directly from the creator. I don’t know if even one word was spoken, but it is the presence overall that calmed my search. I knew that I was with God during those four days, and am now with God all of the days from that moment to this present day.

The difficulty that I developed was me not feeling worthy of being a vessel for this incredible God. My heart mind and soul became somewhat trapped as I continued to feel so tiny while in the presence of this massive perfection that I closely witnessed. Incredible-Loving-Perfection!!! No matter how many gifts of wisdom I received and even being transformed into a Sage title, I still cannot get up onto my legs to simply step forward into the kingdom, a kingdom that I am invited to be with. Last month which was February 2021, a light worker named Virginia contacted me saying she had sudden visions of me. She mentioned to me that I was Baptized by Fire. This reminder gave me energy to look forward into what was holding me back and reintroduced me to being able to stand up on my legs once more.

Now March 2021 I was watching a movie named Blade Runner 2049, where near the end a scientist makes a statement to Harrison Ford in the movie, “Drunk on memory of its perfection.” This statement I cannot get out of my heart as it repeats to me over and over. This statement also has given me the understanding of how Blessed of a person that I really am being Gods creation overall, as I simply now step forward into the kingdom. I am able to now merge directly with its perfection. I now see why this ten year process was necessary since a reduction of my ego was required for me to be able to receive applause as I stepped into the kingdom. Becoming a new creature as the Bible states, is a ongoing process. It does not simply happen within being in a higher level of the loving and fear of reverence a person feels that they are giving to the creator, where in fact the person is actually feeding their own ego which gives a false escalated feeling that they are actually recognized. The new creature becomes when the ego is reduced and then the creator takes the drivers seat of the persons vessel.

The new creature becomes in the early stages of the merging of a persons Inner Child and Higher Self. The person has found themself within not personal effort, but within faith which then allows the divine to direct without any doubt that a person feels they need to be with.

This is a poem that feeds deep into my soul. Remaining “Drunk on the memory of its perfection” will leave a person trapped inside the depth of this poem. Until that person sees the light which allows the person to go beyond being with just the memory, and actually being with the perfection itself. 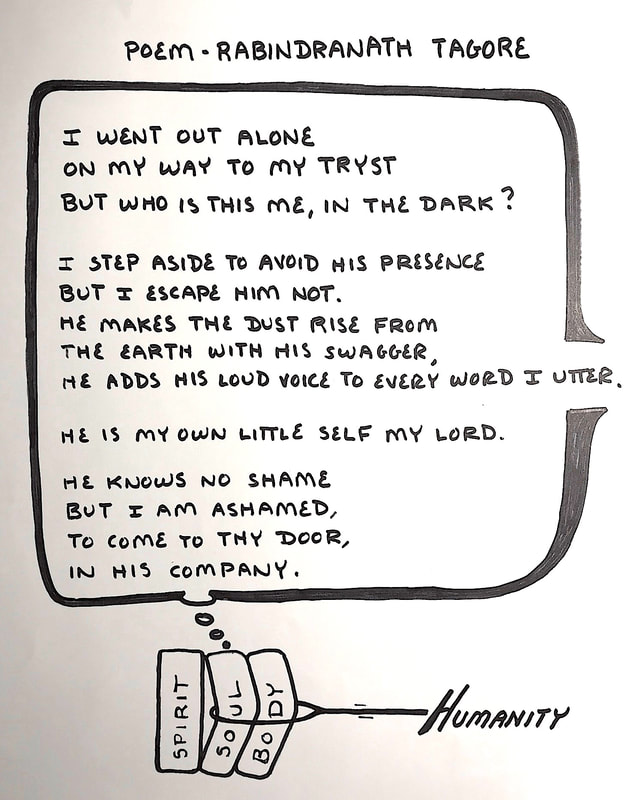 ​Looking into the Bible where Moses discovers the Burning Bush. Many people believe that Moses actually was witnessing a bush being on fire, but I see something completely different. Nutshell story: Moses murders a Egyptian and runs to the desert in hiding for 40 years. Moses is now with family and animals and is 80 years old. God speaks to Moses and instructs Moses to return to Egypt to free the slaves.

In Arizona especially in the hot summer, when looking across the hot desert there seems to be a  distorted heat pattern in view almost as if the desert is on fire. It creates illusions like there is water in the distance on the roadways as well. Moses is walking in the hot desert as he sees this heat pattern going on day after day. A person of that time would describe it as if the desert was on fire in the distance. The earlier Bibles show that Moses is walking in faith and is somewhat daydreaming as he continues on. If Moses was using his sight (eyes) he would have suddenly dropped everything and ran up to view this bush that was totally on fire. I will mention here that the opposite of Faith is Sight.

Here Moses is walking in faith. The Bible explains that a Angel of the Lord appears to Moses in a flame of fire from the midst of a bush. So Moses looked and behold the bush was burning with fire but the bush was not consumed. Many preachers see this as Moses is seeing this with his eyes, but indeed Moses actually is seeing this in a vision, and not through his eyes. Many of the newer rewritten Bibles drop parts of Exodus 3:3 because it does not seem to make sense. But in reality it is very important to understand. Researching back to King James Bible from the 1600s, Exodus 3: 3 shows that Moses is having a vision and Moses sees that the bush is burning with fire, but the bush was not consumed. These next words are removed from the newer Bibles. “Then Moses said “I will now turn aside and see this great sight, why the bush does not burn.” Moses was walking in faith and through his gaze (faith) he was seeing the vision of this bush. Then he opens his eyes and actually looks to see the burning bush. If Moses was seeing a burning bush all along as the newer Bibles suggest, then why would Moses afterwards of seeing the burning bush, “then” look to see the burning bush.

In all actuality if Moses was using his eyes or sight all along, he would have never seen this burning bush. Faith is a much stronger tool for a human, than everything else a human has on this earth plateau. I will go further with this: Exodus 3:4 - So when the Lord saw that Moses turned aside to look, God called to him from the midst of the bush and said, “Moses Moses! And God said, “Here I am!”

Here God sees that Moses is indeed seeing within Faith needing to turn aside to actually see the truth that is happening, and then God speaks to Moses’s Higher Self and Inner Child joining them as one by saying “Moses Moses.” The Higher Self is in the heaven and the Inner Child is the avatar on the earth. “What is in the heaven is also here on the earth.” This is why God mentions Moses twice, “Moses Moses” as God speaks to both which actually makes the one unit. Now that Moses is aligned as one, God speaks through Moses directly as Moses then goes on and frees the Hebrew slaves from Egypt through many miracles. Moses is no longer “Drunk on the memory of its perfection.” Moses is now “with its perfection.” (Gods perfection!). I however love how throughout Exodus, Moses bounces back and forth of feeling personally unworthy, but eventually always pulling through the mission that God is the instructor of.

The burning bush is also a understanding. The fire on earth consumes the bush, but the fire of the divine burns within the bush without consuming the bush. So to allow societies fire into the self will cause the self to burn out or burn entirely. But allowing the divines fire to burn within the self does not consume the self and brings greater light. Allow the enlightened fire within the self to guide the self, instead of allowing societies fiery demands which starts from outside the self, to fester and consume within the self as a guide.
​
The Hebrew word Shalom is not just a greeting. During Moses’s time Shalom meant “Are you Whole.” Whole in the overall sense of fullness and completeness in mind, body and estate. This entire earth life is about finding yourself. When a persons Higher Self and Inner Child become as one unit where God personally directs the persons ‘vehicle’, that person is truly Shalom.