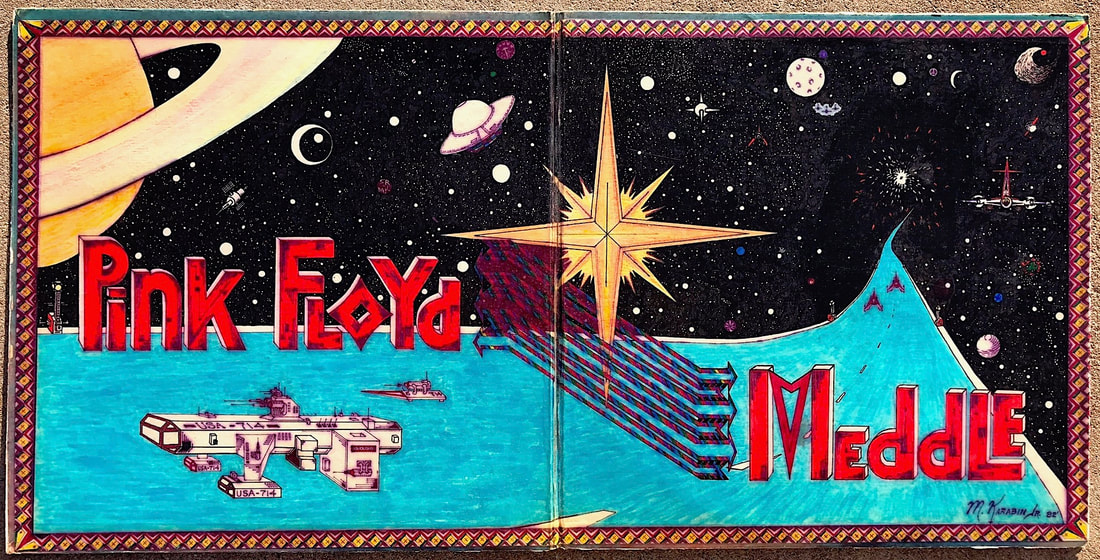 I purchased a Pink Floyd Meddle album brand new from the record store and when I opened it to the album center there was nothing but a blank white inner cover. So after listening to the album dozens of times I decided to make my own drawing of what the music sounded like to me. I came up with this cool space scene. But then I took this creation to the next extreme level. I centered the album within 10 poster boards and decided to create a massive space scene. Unfortunately I have only one photo that shows the connection of the album to the poster boards. Also unfortunately a house flood ruined all of the poster boards leaving me with just the album. Eventually I put clear shelf paper over the album ink drawing to preserve it. Completed in 1982.
--------------------------------------------------------------------------------
I list this piece as fine art since I was seeking absolute perfection with it. Using a template to make circles is somewhat easy, but to make sure the template does not slip by accident, and that the pen ink does not bleed into the paper or slip as well was the overall priority in this masterpiece. This piece is named "Sixty Seven Thousand And Sixty Eight," because I drew 67,068 circles to complete it. I made sure I counted every circle as I was creating it. Unfortunately these are the only two photos I have of the piece. The piece got ruined by a carless contractor that was reshingling my garage roof. The contractor removed all of the shingles from the roof not caring about checking the weather first, and never showed up to work the next day as a monsoon storm ruined a portion of my art pieces. I found out later that the contractor took my prepaid monies and invested it in heroin. Good times! Completed in April 1985. 22" x 22." Black ink on white poster board. 300 hours.