The Lavender piton was designed to have the piton eye open where a rope or ring could be placed, then the eye was pounded shut which held the rope or ring in place.

The Lavender piton was found on the north face of "Sneffels," which is in the Oray area in Colorado.

I was hoping to get more details about the piton you donated to Marty's amazing collections.

I found the original Lavender article on the 1931 ascent of Sneffels (attached)--in it, he seems to say the he looked at the more direct Northwest arete up high, but said it would have needed pitons and carabiners ("madness to attempt" without them).

I climbed Sneffels when I was at Telluride Mountaineering school, the peak loomed large at Skyline Ranch.  But I can't recall anything about it, that was the mid 1970s.

What do you think?  I would like to write about this piton and your discovery of it.

OK!
I’ve been jogging my memory……..and the photo helped……..and the bit about Marty……..I do remember finding a home for the piton (definitely NOT a pin) with him.
Marty provided many of the new replacement bolts in the Bleak Streak area on Granite Mountain.

I lived in Montrose in 1976-78 (ish) and could see the North Face of Sneffels in glorious detail from the roof of my new house (I was building it). I could catch the perfect conditions and nip off for a quick route or two while my wife was at work in the candy factory.

The Lavender-piton day was in late spring, probably ’77. Usually I focussed on the snow gullies and ice smears that gave swift progress but on that occasion I branched out onto the final summit ridge that fell away to the west from the summit. That area seemed to have more solid rock than elsewhere (?) and was getting some sun. I may have been on the pinnacle of the article, or just out on the ridge.
The climbing was airy but not really hard. But hard enough to think seriously about getting down!
I sort of thought that maybe someone (I’d never heard of friend Lavender) had beaten me to the “route” and bailed on that “piton”.
I wiggled it with my hand (I had left my ice tools down below) and it fell into my palm………..booty!

I have made quite a few pitons over the years……... but nothing like that!
How could you NOT weld the eye shut? Or taper the blade.?
I greatly admired the dauntless nature of the anonymous maker, especially if he (they) had rapped off it in such a dramatic spot, but I resolved to find more sturdy pieces for actual use.

Glad Marty has featured it.
Quite the story!

Hope you’re book is coming along well.
Homo Sapiens is a tool maker and can be an adventurous fellow. Those early pioneers certainly were……….

PS:  Let me know if you need any other details.
​Message from Marty:                 April 11, 2022
​
​Quite the story for sure!!!
​
I always wondered if the piton was to be placed with the hammer eye being upwards.
The ring is held in place by the eye but will rest upon the piton body while being weighted.
Otherwise the ring will pull directly upon the unwelded piton eye possibly opening it. 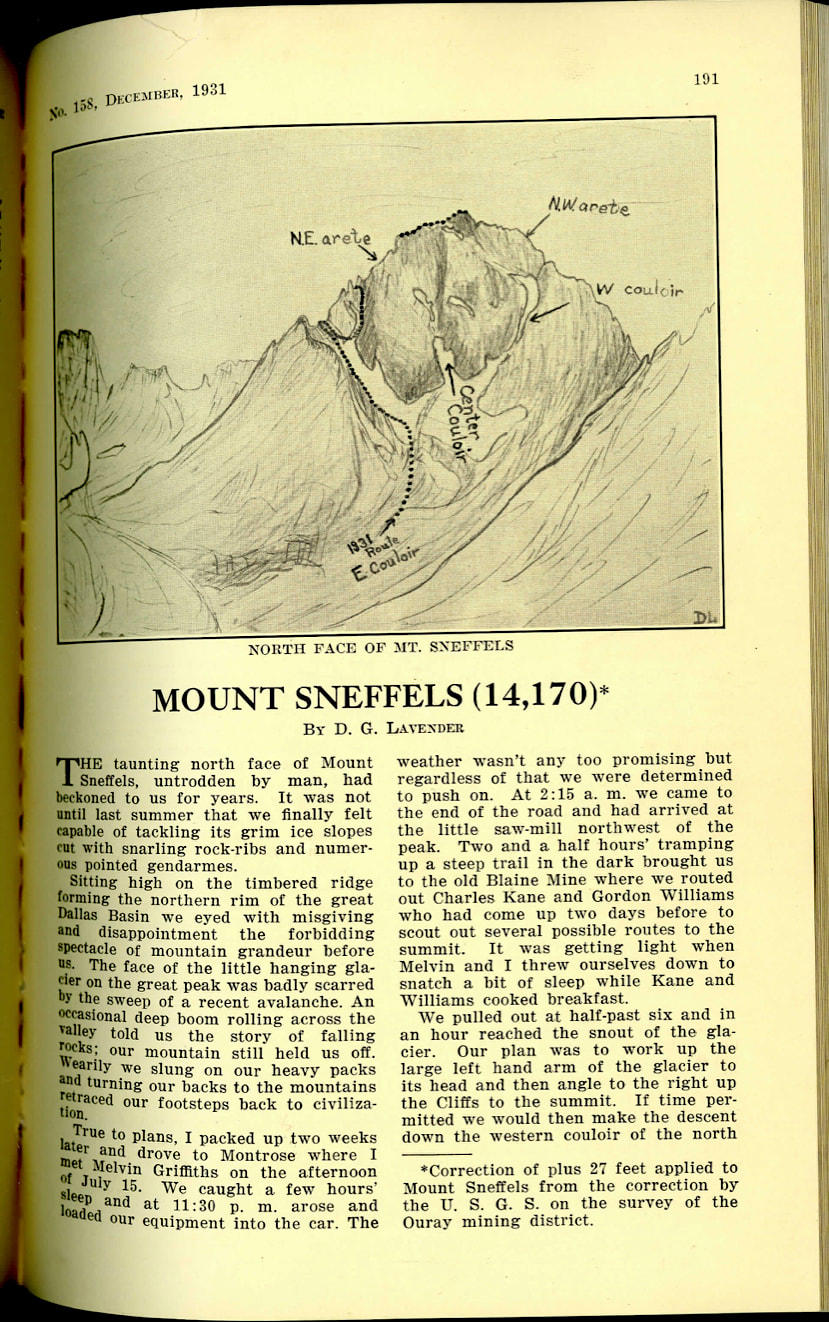 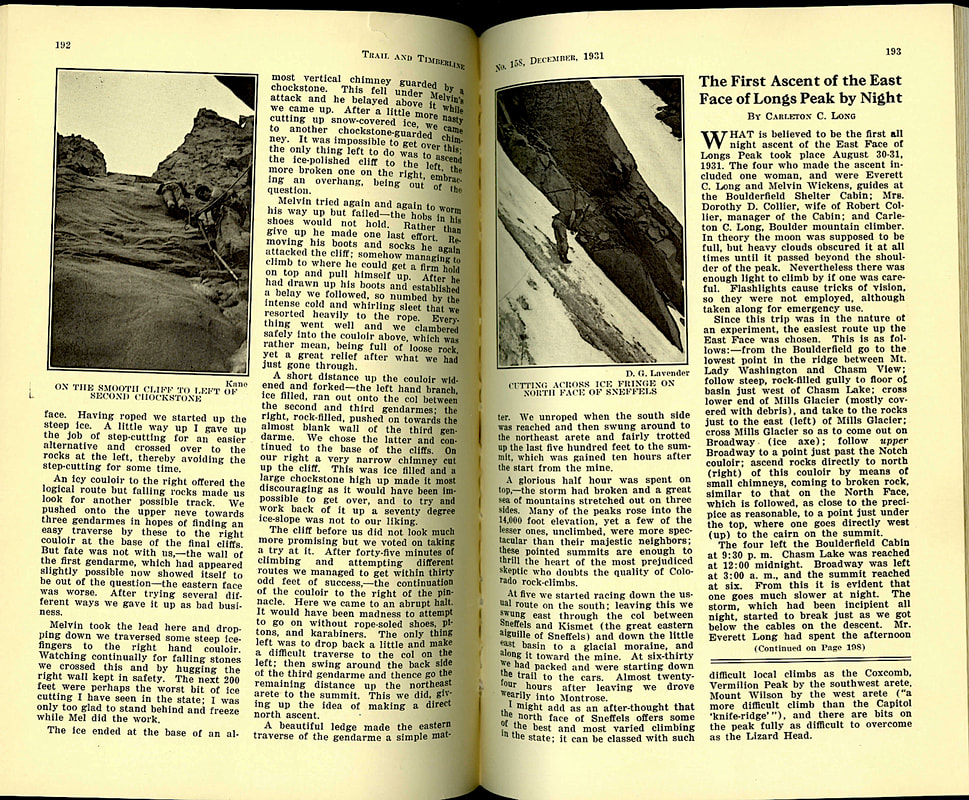 Good to see you still out there, agonizing about climbing gear.

That weird pin went to a good home!

Yup………that would be the logical way to use that ring piton. BUT that means there would be a direct force on the shaft, with no head to wedge in the gap underneath and take some of the force.
Scary.
But maybe scary only to us, now? Lavender probably thought it was State Of The Art……..which I guess it WAS.

Welding those babies was something else too.
Very difficult to get a good weld, on the ring especially……which has a minimal metal to metal join.
Very hard with old oxy-acetelene gear. Still hard with modern MIG/TIG gear.

Recently I “learned” to weld. Glad I never tried in my piton-making days!

It was especially hard to get a proper taper on homemade pitons.
In Rhodesia we used a lot of homemade “Angle (iron) Pitons”……..for the common, wider, cracks.
My scoutmaster (our climbing guru) set such an anchor for their abseil off Smamalibari  — north of (then) Salisbury:
It was a beefy angle with a big ring. As the first guy went down Ken noticed the piton move a bit so he went to grab the ring. Just got there in time and ended up with the ring in 2 fingers and the abseiler like a fish on a line. Somehow they managed to pound the angle back in and made it home.
They had put too much taper on the shaft so it was only holding in a small contact area.

Guess we were ALL just lucky……..

Attached is the picture of the piton you gave to Marty, and you are sure you found it on the North Face of Sneffels?

And apparently it was set up as a rappel anchor most likely?

One of the earliest documented USA pitons with "provenance".  The one I have from 1936 attempt on Shiprock might be second oldest.

I am about to write the story about them now.

Also sketch I found, the "San Juan Piton". Will add more images and sources when I post.

Guess you mean the “Lizard Head” in Colorado……not the Prescott one.

I never made it up on that.

But the pic looks interesting.
From the bend, presumably formed on extraction, it seems like those Mauerhaken types — with the eye facing up………?
Looks like some hand forging…….
Maybe for soft rock with that point?

These old pins seem very inadequate to us now but, in the context of their times, they were most welcome.
Nowadays we have rope and anchors that can take a leader fall, and we expect our pro to be strong enough for those high loads.

Back then, especially with hemp or cotton ropes, the attitude was “The Leader never Falls”. You climbed like that……..if a hold broke off you probably fell and that was that.
But — a piton gave you a moment of security. While you were close to it you could try a hard move or take a rest……..or bail. It wasn’t like you were way out and totally committed.
You often knew you couldn’t afford to fall on the piton but you could hang, and work out your salvation.

It’s a bit like having a system to hang from your tools while soloing on ice. That saved my butt once when I got hit by falling ice.
I used to carry an “old” screw in case of a retreat but soon upgraded that to the very best, after a few such bails!

Those old farts did some truly amazing things for the day and the gear.
Glad to see you’re keeping it fresh.

Page from the book "Climbing in North America," by Chris Jones, page 106 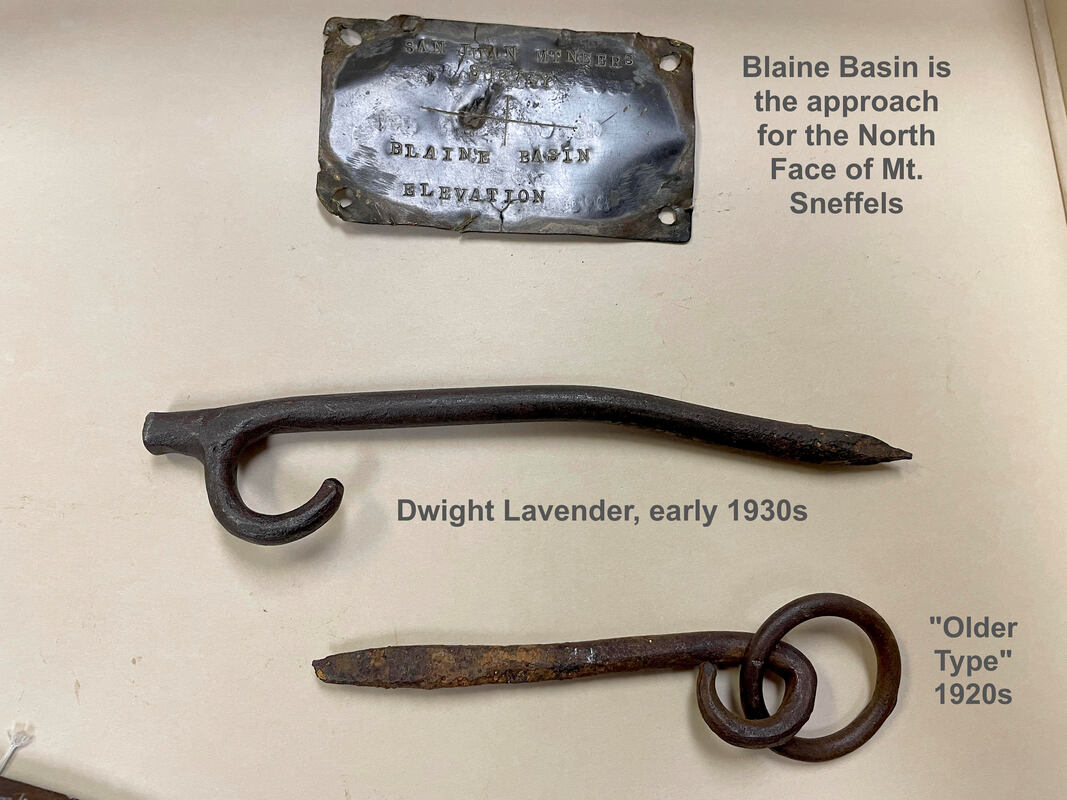