was over, there were many times as we were walking back to our vehicle, we were invited to join in and attend the reserved cookout parties that were going on in the open space at the base of the peak. I think it was a extension of the Pinnacle Peak Patio or something where wedding parties gathered, or graduations etc. Pinnacle Peak Patio restaurant was totally awesome as well to enjoy a great meal before heading back home. Pinnacle Peak Patio was a restaurant that had thousands of ties attached to the ceiling. The waitresses would purposely use scissors and cut the ties off of the visitors that first walked in the restaurant wearing a tie. My dad got a kick out of it when I had him wear a tie when we went for a meal there. Another great hangout that was located just down the road from the peak was Greasewood Flats. A outdoor bar restaurant that had campfires set up and a cowboy band cranking out the tunes. Greasewood Flats was totally relaxing and awesome!!! 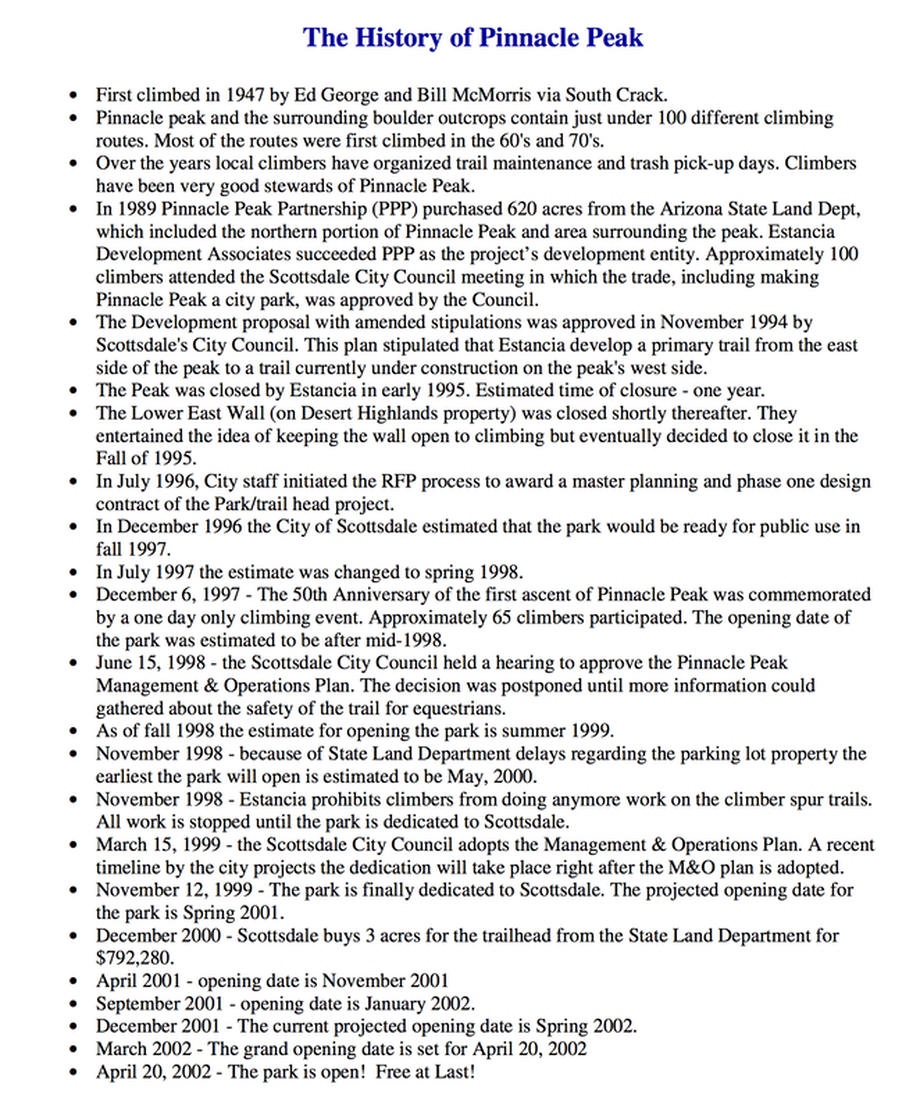 This is my Pinnacle Peak speech to the City of Scottsdale Town Council. I rehearsed this speech a bunch of times since I only was allowed three minutes time to deliver it. After the speech was completed, I received a standing ovation from the entire place, including the city council members, and even the Mayor of Scottsdale.


Good evening, my name is Marty Karabin and I live at 1207 E. Villa Maria Dr. in Phoenix. I thank the Scottsdale City Council members for allowing me to share a feeling.
Today was a beautiful day, did anybody notice? I woke up early and rushed outside and was lucky to see an owl sitting on top of a saguaro. Two coyotes quickly snuck across the street disappearing into the desert landscape as the sun rose up from the mountains. The colors of the sky went from a fiery red to an orange, and then faded to blue as another day was born.
Today was a peaceful day. If you want to experience this feeling, you better get up pretty early because you have to drive 30 minutes to get there. Nature does not like lights, houses, or the noise of a car beeping as it rushes by. Nature was once right outside of my front door but now, it is far away. It is so far that it is hard to fit into my schedule of work, family and friends and that drive is just too far. With the way us humans continually progress, the drive will soon take 45 minutes, then an hour or more. This peaceful feeling will soon require me to make vacation plans to find it and even then, will I have time to enjoy it?
A friend took me to Pinnacle Peak, fitted me into a harness and said, ”Climb up this wall and you will find the peace that you are looking for.” I did just that and guess what, he was right! I could see for miles and it was beautiful. I could see coyotes playing far away and a ringtail cat strategically creeping toward my lunch below. Birds were soaring all around me in playful dance singing great song and yes, an owl was sitting on top of a nearby saguaro. I named him Fred. The next day I returned without my friend and found an easy route to the top not requiring me to wear all of the climbing gear, just so I could watch nature playing again. I once again felt peace, a peace so absolute that it brought tears to my eyes and hours passed away as minutes.
Constantly I returned for ten years and then one day, I was not allowed to climb Pinnacle Peak. I wondered what had happened to this beautiful place and how could anybody restrict somebody from nature, especially this beautiful nature?
I found myself lost and confused. For three years I traveled to Pinnacle Peak and parked on the side of the road amongst the broken beer bottles and left over construction trash, and I stared at the top of the peak remembering how beautiful this place once was.
December 6, 1997 was the 50th anniversary of the first ascent of Pinnacle Peak. Estancia and the Arizona State Land Department allowed not just the climbers, but EVERYBODY to enjoy this beautiful mountain for six hours. The night before I didn’t even sleep as I anticipated the six glorious hours. I remember running up the trail as fast as I could passing all of the other climbers since I wanted to be the first to reach the top. I even brought with me an anniversary register for everybody to sign once they were on top and YES, my name was signed first. As I sat on top, I felt as though I was visiting a long lost friend. I gazed down on the landscape below and the coyotes were gone. I guess they didn’t like to live on the new golf course within the new houses. Even Fred was gone.
I write this story as I once again am parked on the side of the road staring at the top of the peak. It’s been over a year now since I was allowed to visit my old friend, and I wonder if I will be ever able to sit on top of the peak again. I feel that society is slowing taking away the true values of freedom, and freedom is only offered to those who can afford it.
Did anybody notice how beautiful today was?


Written:  March 1999
Since I had no helper, the adventure was totally on! Many of the formations were easy to get on top of, others I had to free solo to the top. I remember getting on top of the Wedge via soloing the 5.7 route up the back. I was so scared the first few times that I got myself on lead clipping the two bolts, and pretending I had a belayer below to catch my fall. I would even talk to the invisible belayer to keep my mind together. The formation is 45 feet tall. In the position I was in, I really was looking at myself from the inside out. Talk about controlling the Elvis leg! The re-bolting mission was not just unscrewing bolts, it was drilling and installing glue-in bolts as well so it was a big responsibility. I had the Peak all to myself for five weeks. It was an incredibly peaceful time of my life! I felt like I owned Pinnacle Peak and I was the first explorer. Dief at times would visit me and ask how things were going. Dief was also installing his homemade trail markers in various areas along the climbers trails to keep climbers on the same path once the peak opened. Props goes out to Dief who funded all of the expenses for the rebolting. 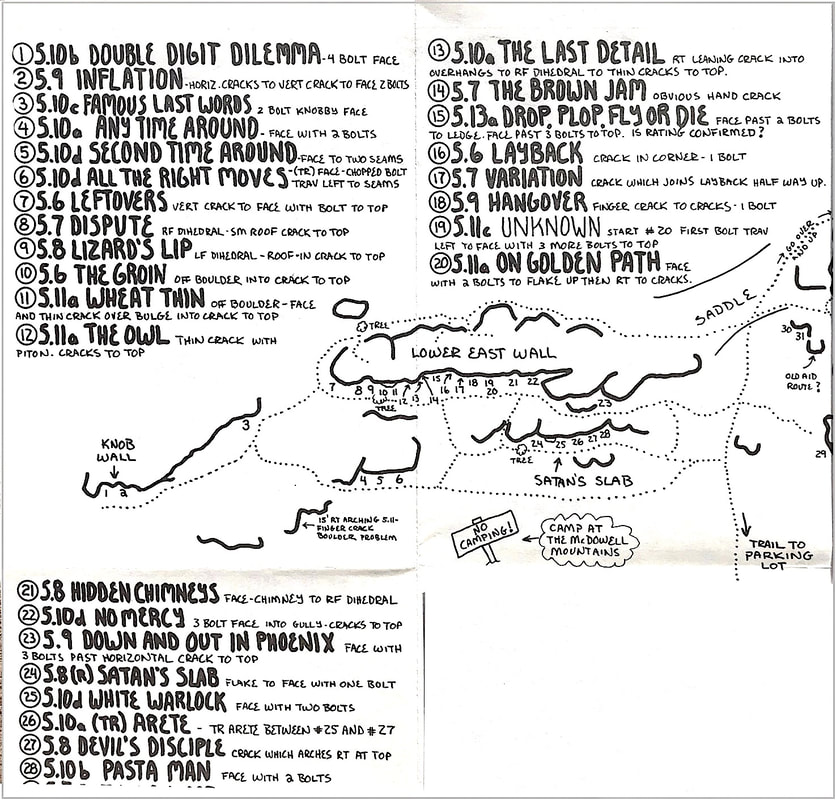 Old Pinnacle Peak map showing the Lower East Wall which is located on
​Desert Highlands property and is off limits to climbing.
There were a lot of amazing routes on the lower East Wall!

I got really good at soloing the South Crack route to the summit, and soloing to the Summit via the Notch. It was a lot of work hauling the loads but at the same time, I would do it again and again if I had the opportunity. There is a magical moment a person reaches when you go past exhaustion and then feel total inspiration. I could not get enough of this feeling. When my mission was completed I felt sad knowing my peaceful sanctuary was now opening to the overall public, but at the same time I felt that I did good overall. All I asked for from the City for payment was one of the “Closed Pinnacle Peak” signs to place into the museum. I felt that if I had received money for the job, then all of the feelings and memories I experienced, would have been washed away. I redrew the Pinnacle Peak mini guide that was available in stores when the peak reopened to the public April 20, 2002. Repeating Dief's quote here, "The Park is Open!!! Free At Last!!!"