Once we hiked a few more canyons over and headed further up the canyon wash, the pinnacle came into view. At first I was in full applause as the pinnacle high-fived me back. But then I was seeing that the pinnacle was not a solid structure, but was more made of stacked up blocks. Let me also include that the pinnacle seemed to be leaning..... more than a little. Hmmmmmm...  The scenery was absolutely beautiful and the day was still somewhat cool, but that AZ April sun tends to sneak up with its warmth.
The plan was to find the shortest way to get to the top, "The path of least resistance." Since this pinnacle was Neo's find, Neo gets the first crack at it so he anxiously and nervously geared up. At first we tried to traverse across to the ledge that meets the pinnacle, but the short down drops were too unprotected so we bailed on the traverse idea. We moved downhill to a short headwall that led to the ledge and pinnacle which looked like it had possibilities. But if the leader failed, the leader takes a partial ride down a 45 degree hillside of loose choss before being caught by the belay.
The first moves on the headwall felt like solid 5.10 or 5.10+, and it's only a three or four move somewhat thin crux. However the rock lower on the formation is total choss. If the leader fell it would be game over! I was on top rope and had no gear weight on me, but as I was doing the climbing moves on the headwall I was telling Neo to keep me tight. Stop, take a breath, and continue on!!! Traversing around to the east side of the pinnacle has some danger stuff there going on as well. Big 6 foot columns of rock that simply could be kicked off of the pinnacle, but at the same time serve as the foot holds. Once on the low angle east face the climbing becomes really enjoyable. Totally solid stone with nice pockets and optional cracks to place protection. The view is incredible, but it's the exposure, "well.... along with the someday possible collapse," that gives the route the applause. 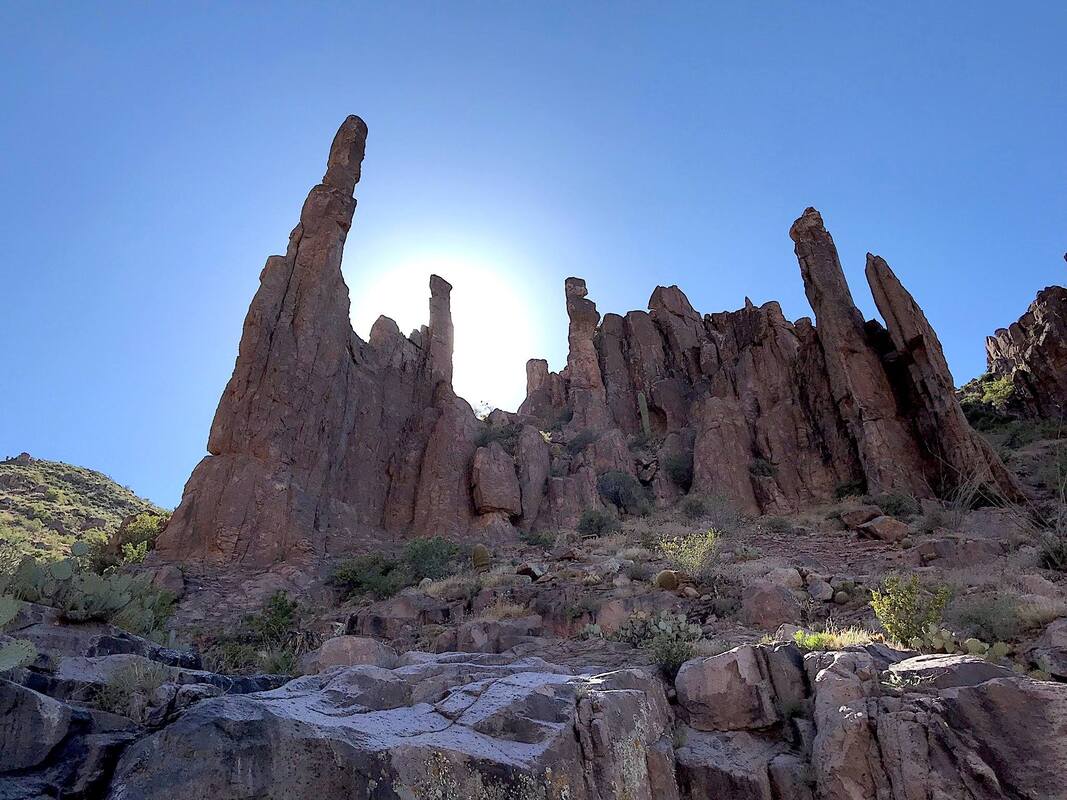