on this wall since they scramble up it and either get stuck somewhere in the middle of the face in fear of continuing upwards, or can't figure out how to get back down and chance an improper descent path. The City of Phoenix Fire Department uses my MK map as a guide to safely get their fire department rescuers to the top of the mountain, where they then retrieve the stuck peoples off of the mountain via the many belay stations listed on the MK map. 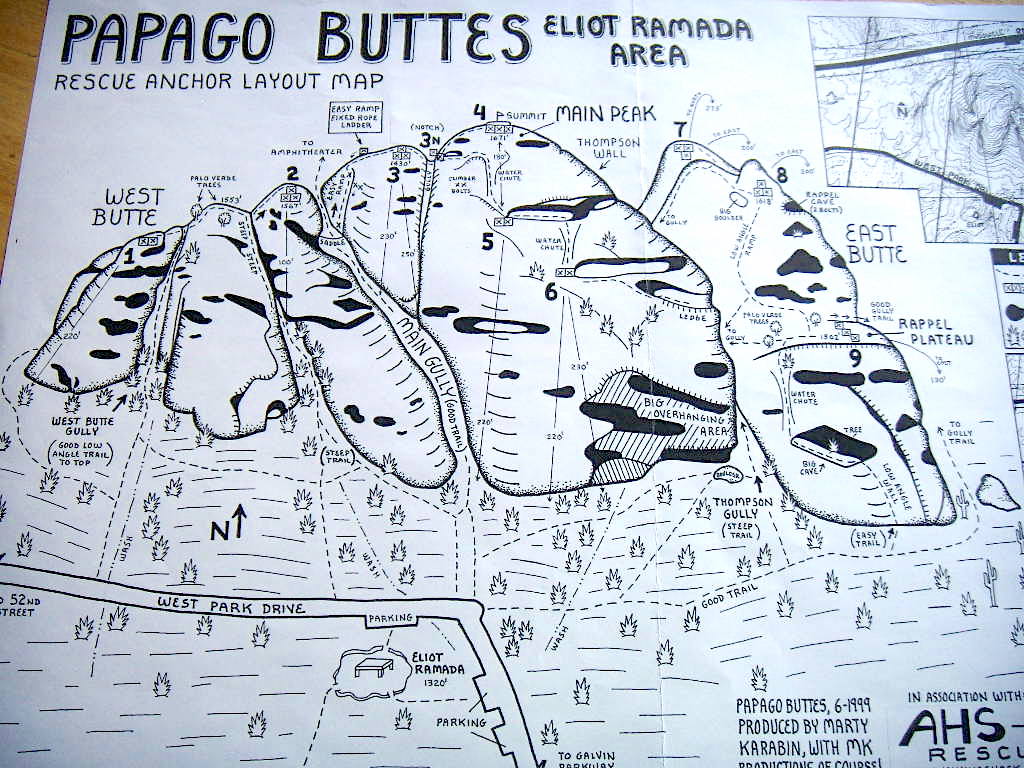 The area of filming is a wall which is around 250 feet tall, so raising and lowering a climber/non-climber at that height on a crumbly rock face was out of the question in my mind. But I came up with an alternative plan by hiring one of the most creative climbing gadget riggers in town, my boss at the Phoenix Rock Gym, Paul Diefenderfer. Paul (Dief) has been hired by many construction companies, where he lowered and raised construction inspectors up and down cliff walls where new bridges and roadways were being built. Dief at the time was working with inspectors at the Hoover Dam bridge project, which the new bridge was completed about a year ago. Dief has created a device out of a sail boat winch which had the ability to safely raise and lower major amounts of weight. All I had to do was position/anchor Dief twenty or so feet above the actual filming area, and we were in business. We used two radios for communication between us, and also used visual hand signals as a secondary form of communication to give the film crew the action that they were looking for. The producer of the film was quite impressed with our climbing rigging and communication system that Dief and I came up with. The producer mentioned that he used climbing companies before, that had near disaster results to the camera equipment, the climbing riggers did not really know what they were doing, or it continually took extra hours to get the film talent into position. Dief's job was just sitting on his butt in a large cave/hueco on the climbing face for about 9 hours, winching the film talent up and down. I was the ground crew that got to be with all of the action. My job was making sure the talent/climbers were properly tied in, harness and gear looked proper for the shoot, everybody was guaranteed the highest level of safety, which included the climbers and film crew below.
bellies, and then get to the resort through rush hour traffic. My kids were tired and irritable and wanted just to go home and were not interested in this meeting that I had to go to. But tough beans kids! We arrived to notice five new children that were with their parents that were selected as the new talent possibilities. The child that did not cry when being placed into the child carrier was going to be the child selected for the shoot. My youngest son Nicholas was having fun playing on the resort couches and crawling all over one of the directors named Brian. Brian was really nice, but was getting irritated of Nicholas playing with him. Brian's worries escalated as he watched the child talent problem continue. I could see in each of the parents eyes that they were bummed when their child was not selected for this high paying opportunity of having their child in a commercial. All of the new five possible kids were crying due to the child carrier uncertainty, and they were not even dangling off of a cliff wall yet. ​
On the final day of shooting, I wore the Evolv Wiener Dog t-shirt and everybody could not believe the shirt was created before this commercial came to be. The filming was a success! All of us got paid many thousands for our parts in the shoot, and Nicholas to this day still receives royalty checks every time that commercial is even mentioned. Nicholas's pay has exceeded $11,000 for his 5 hours of work. We allowed him to buy a few toys and games with the money, and the rest went into his college fund. Trevor Cornish with Spy Films was the overall Director. On a sad note, the assistant director/producer named Brian Atkinson at the time was quitting smoking. He was chewing Nicorette gum to relieve his cigarette cravings, and shortly after the commercial was completed, he died from what they believe was from Nicorette Gum intoxication. Chewing over 30 pieces of gum per day. Brian was in his mid 30s