......................................................................................
roof using stationary holds and swinging hanging ball holds all finalizing on a 16” hanging sphere hold made by Three Ball Climbing. The route had a flash number and redpoint number for those that finished the route. Also the route had three bonus raffle tickets available which were awarded the further on the route the competitor made it to.
- Added Lord Of The Rings Side Event. Super fun challenge where the foot hold was a continuous 10’ rail. Only 4 climbing holds to climb with. The challenge was that the route required the climber to move a series of quickdraws from one ring bolt to another while traversing the route one direction, then return back on the route moving the quickdraws back to their original ring bolt position. Time stopped when all ring bolts were clipped and both hands were on the finish hold (which was also the starting hold). So traverse left 10’ then traverse back going right for 10’ and moving 7 quickdraws while doing it. Fastest time scored with this new event was 13.57 seconds. For added fun the rings on the bolts sat flat to the wall making it harder to clip quickly, old style oval carabiners were used for the quickdraws and the dog bone webbing was a open loop which was not sewn tight so the carabiner could accidentally rotate out of position. Good fun!!!
- The rope route for 2015 was a Three Ball Climbing challenge. I don’t remember exactly what the discipline was for the challenge.
- The Spinner Route was on a auto belay system. We dropped the half way bonus raffle ticket, so now the competitor had to make it to the finish hold to get the raffle ticket. We heard a lot of screams as the climbers got pitched off of the sudden spinning holds and the slight fall before the auto belay device caught firmly.
- I finally figured out how to coarseset the Two Person Route perfectly forcing the two climbers to rely on each other while climbing the route. The center holds became low angle slopers which were bad for hands but great for foot holds. The climbers would hold hands and pull on each other to get through the crux of the event. Remember that the comp was only three hours long so the harder the side event routes were the less climbers would be able to get onto the routes without a long wait. If each climber took 5 minutes to climb the route, that is only 36 climbers having a chance at the route, and there were close to 100 competitors at each of the T&D events. So the design for the side events had to be more forgiving than absolute to allow more climbers to get onto them and through them quicker. After a few T&D events, the veterans of this T&D competition knew that the best strategy for this type of comp was to start on the side events and finish on the boulder problems.
- Blindfold Route now has mid way raffle ticket added, and top for second raffle ticket. This was to get more competitors onto the side event.
- Balance beam has one or two spoons with tennis balls bonus to gain two raffle tickets.
- We finally dialed in our system at the end of the comp getting the correct raffle tickets to the competitors and separating the tickets to the proper ticket  jars. Overall each competitor had a opportunity to gain raffle tickets through sponsor boulder problems, through Side Events, and sponsored routes. So besides tallying up and triple checking final competitor scores, the raffle tickets gained had to go correctly into many different separate jars. Basically we had a dozen or more Nalgene water bottles which worked great for this task. About 8 PRG staff people were helping the competitors as they turned in their score cards. Two staff people were on the computer just entering scores from the score card. It was a crazy chaotic process but every year we got it done! The Cash Pad raffle was a separate thing where the tickets were always its own special color separate from all of the other raffle ticket colors used in the comp. ​
......................................................................................
T&D 2015 scorecard front and back. Scorecard designed by Justin Wagner, Planetary Holds.
T&D 2015 comp t-shirt art and t-shirt. Design by MK Productions Of Course.
​Printed by Express Screen Printing through NT Kustom. 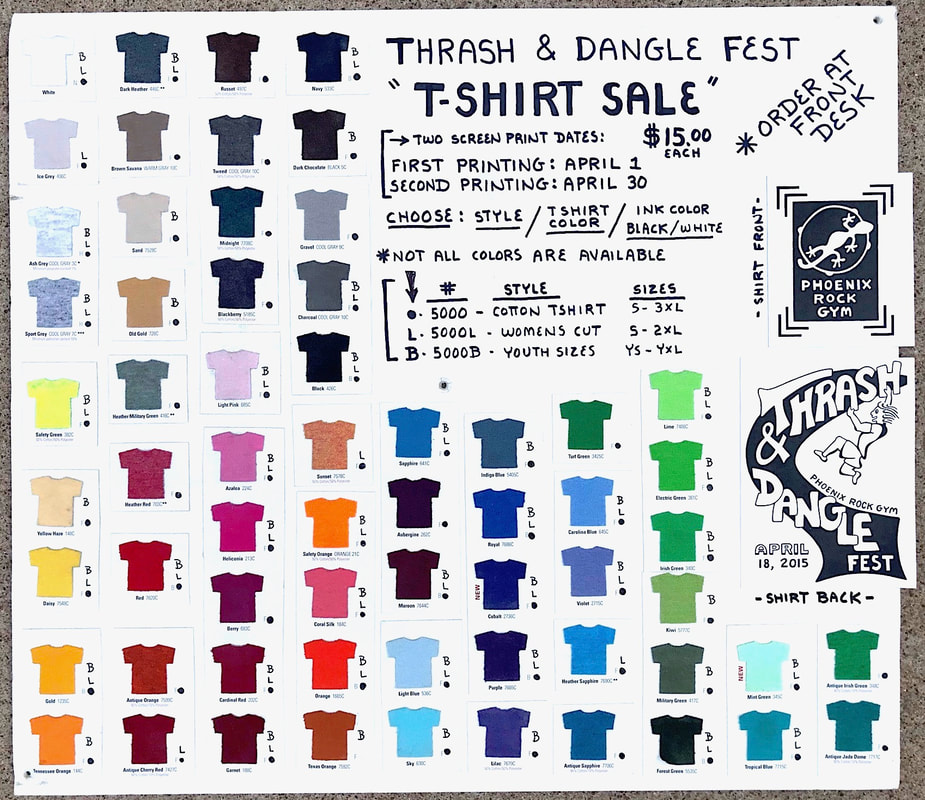 T&D 2015 ribbons art and ribbons. For the 2015 ribbons I wanted to create the best ribbon design yet which included having the most cuts with scissors to create its unique shape. Designed by MK Productions Of Course. Printed by Express Screen Printing.
-- Route guides made by Justin Wagner --