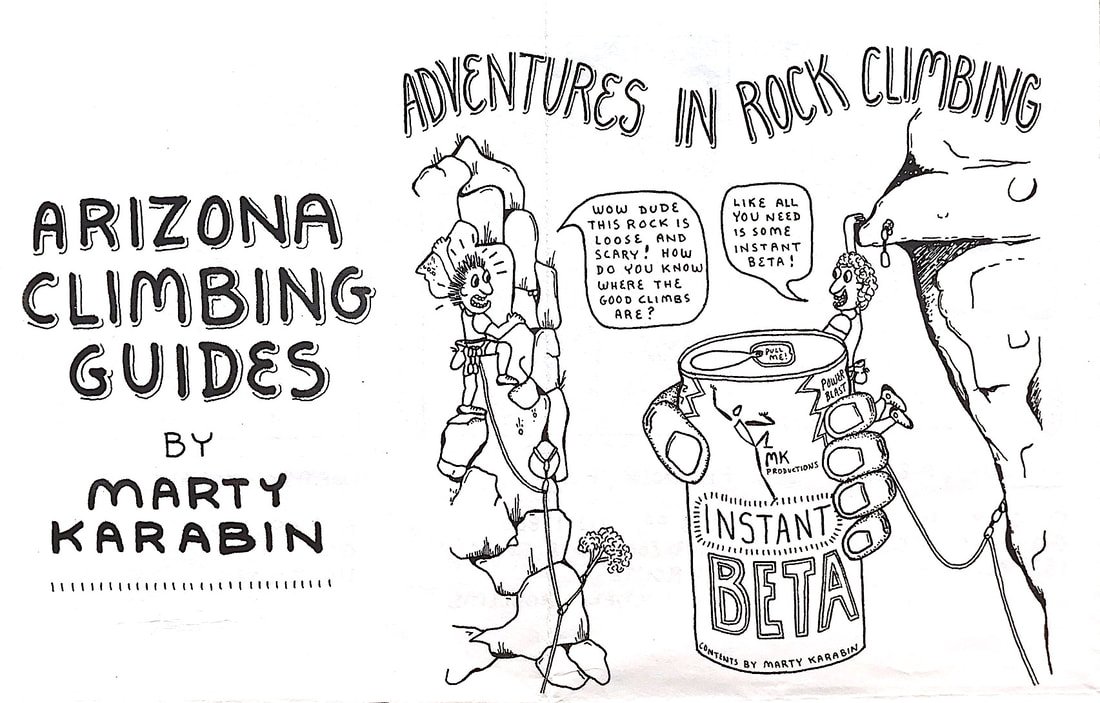 staples individually by hand. Three different color covers and 200 guidebooks were made. As I was hanging out at the guard rail along the road at Windy Point gathering further information for the guidebook, a person approached me and asked me what I was doing. I showed him my paper notes and then on the spot he proceeded to fill in the missing information I was seeking for the guide. I was totally amazed this person knew the area so well and I was very thankful. He wished me good luck on creating my guidebook then said his name was Eric Fazio-Rhicard. Soon after my guidebook was completed and in a few climbing stores, Eric's first edition of the Mount Lemmon guidebook became available. It is really inspiring that Eric helped me create my first guidebook, while not even saying that his guidebook was in print at that time. Later I found Eric's Mount Lemmon supplement guide created January 1989.
In 1989 Zonerland became a issue that suddenly was nation wide. Instantly a bolting ban went into effect in all Wilderness areas throughout the United States. The overall Wilderness Act was established in 1964, but wasn't a issue at that time with rock climbers. But when climbing fixed anchors were becoming more used, rock climbing became a major issue. I find it really wild that the overall Wilderness bolting issue started right here in Arizona in the Superstition Mountains. So since the Superstition Mountains became off limits for any additional fixed anchors, more attention went to the Queen Creek Canyon area.
they had. The store employee was not willing to give me any scrap of information which I found to be weird. At that time I just wished there was some way I could purchase a smaller inexpensive guide that traveling climbers will be able to use. So I came up with the idea of creating “Mini Guides.” The challenge was to put all of the information on a single sheet of paper and create a fun climbing cover drawing that people would want to collect. December 1992 I created my first Mini Guide to Camelback Mountain. The mini guide is first completely drawn in pencil to make sure all of the information fits within the 11 x 17 piece of paper. For the Camelback guide and the Pinnacle Peak guide, I did not have a light board to use to redraw the entire guide from pencil to ink, so I taped the papers together on my home patio door and while the sun was the strongest outside, I would stand and redraw the guides using the sunlight for the light like a light board. Poor man’s process for sure, but it totally worked!!!! From the pencil drawing came the first ink proof, then I would redraw it entirely again in ink to perfect the drawings. So yes each mini guide I have created, is actually drawn three times by hand to perfect it.
​
As I reprinted the guides I updated the information contained within. The retail cost was only $2.00. Over the years as the cost of printing went up the price rose to $3.00. Then during the 2008 recession the cost of printing went up enormously forcing the guides to retail at $5.00 each. In 2016 the stores demanded that I add a UPC barcode to all of the maps, so all of the maps were reprinted once again.
throughout the book is around 100 rude bush drawings. The Upper Devils Canyon mini guide #3 is the first guide I created using color on the cover drawing. While at the climbing store looking at all of the guide maps it was hard to see what guides were new since they were all black and white. So color was added to the fun.
make the area awesome for bouldering. Further up on the hillside is taller boulders that have fun bolted routes on them. In the 1980s and 1990s we would drive our vehicles up to the boulders and listen to tunes as we were climbing. There were many overnight camping parties in the area which unfortunately brought more smashed glass bottles also to the area. Crash pads were still not invented yet so when I first started climbing at Beardsley there were many large pieces of carpet at the base of the boulders and that was the standard crash pads of that time. We all learned how to fall correctly since a ground fall could become a major injury. I created the guide mainly to create greater awareness of the boulders to other climbers in fear that someday a housing development would shut the area down. Eventually Beardsley became part of the Phoenix Parks system and climbing continues to this day!
..........................................................................................................