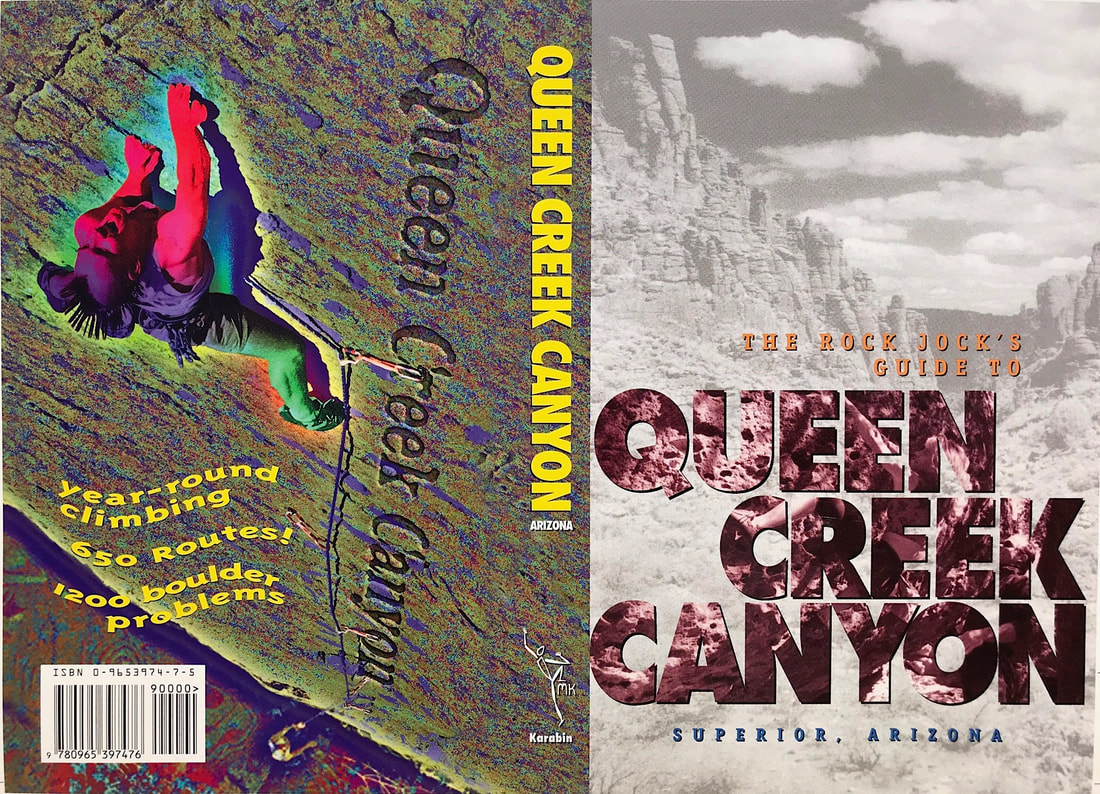 The most difficult thing about guidebooks is being able to locate the climbing walls or formations that are listed within the guidebooks. I came up with a ingenious way of never getting lost while you are in a area, or at the climbing walls itself. At the top of each page near the gutter of the book I placed a page number where the area map to that area is. On the outer edge of the book is listed the areas name. So here you can see you are in the Mine Area and the Area Map is on page 102. So page 102 shows the entire area you are within, and each area in the area map also shows a page number referencing you back to the formation you were just at. I told John Sherman of my mapping system which he used in his updated book to Hueco Tanks Texas, but John ended up putting the area map page reference within the middle of certain pages, and not at the top of each page. So as we shared a beer together, I showed him why the design of the Queen Creek Guidebook, was superior to his Hueco Tanks book. He laughed!
I knew four full page comics were going to be included into the guidebook, so I came up with the idea that the comics will somehow show the four main elements of life. The ancients believed the World to be composed of 4 basic elements – Fire, Water, Air, and Earth. These were considered the critical energy forces that sustained life.
Once the book was completed a editor from Arizona Highways magazine got in contact with me saying that he was impressed on how I created the Road Tour where the mile markers were accompanied with the Highway number. He said that he was going to add this system into the road tours that Arizona Highways writes about in their magazine.
In February 1997 Climbing magazine did a review to the Queen Creek guidebook and gave it a bad writeup. An outpouring of letters suddenly were sent to the magazine slamming their review process of guidebooks overall. For the following March 1997 Climbing magazine the Queen Creek guidebook was honored in their editorial section apologizing for the bad review. After my QC book review incident, the Climbing magazine stopped reviewing guidebooks overall.

In 2000 a guidebook poll at the Outdoor Retailers Show showed the Rock Jock's Guide to Queen Creek Canyon was listed as 3rd best guidebook produced in the USA. #1 was a guidebook to Smith Rock since it was the birth place to sport climbing. #2 was John Shermans guide to Hueco Tanks. I was pulled to the side and told that my Queen Creek book actually was voted as #1, but due to politics, and John Sherman being a past contributor to Climbing magazine, I was shifted to #3 due to politics.